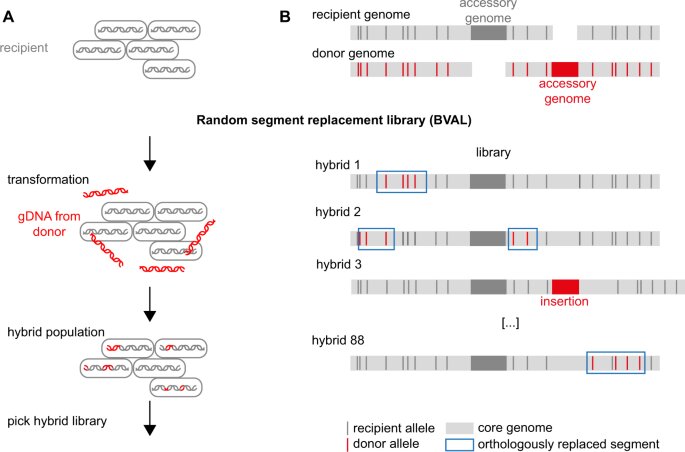 Bacteria can take advantage of genetic material from other bacteria

Bacteria can exchange genetic material with each other, even between species. Rather than being transmitted from ancestor to descendant, genetic information is exchanged between organisms living at the same time. By systematically characterizing the fitness effects of this so-called horizontal gene transfer, researchers from the Institute for Biological Physics at the University of Cologne have found that they can predict whether gene transfer accelerates adaptation. under certain growing conditions.

The group generated a series of hybrids of the bacterium Bacillus subtilis and related bacterial species by horizontal gene transfer. They then tested the bacteria for their adaptability to environmental factors such as temperature and food supply. They present their findings in the paper “The distribution of fitness effects of interspecific transformation reveals potential for rapid adaptive evolution”, published in The ISME magazine.

A single bacterial species has only a relatively small genome and reproduces only by copying its own genetic information. Thus, its ability to adapt is limited. In community with other species, however, bacteria can acquire genetic material from their neighbors and incorporate it into their own genome.

But can bacteria actually improve their chances of survival with this new genetic material? Under what conditions does this provide an advantage? Professor Dr. Berenike Maier and her team explored these questions, showing in an evolution experiment that bacteria benefit from genetic material from other bacteria under certain growth conditions.

Researchers generated a large number of hybrids between the “hay bacillus” Bacillus subtilis and related species of Bacillus by means of horizontal gene transfer and determined their suitability. Fitness describes how quickly a hybrid reproduces compared to the unmodified bacterium, called the parent strain. Rapid growth means that one bacterial species can displace another and thus achieve dominance over its own descendants.

To test their adaptability, the researchers determined the suitability of the hybrids under different environmental conditions, such as high temperature or different food sources. “We obtained a different distribution of fitness effects for each condition. The important question now was whether we could predict from this whether horizontal gene transfer would increase adaptability in a particular environmental condition,” said said Isabel Rathmann, one of the study’s lead authors.

To test these predictions, the scientists designed a high-throughput evolution experiment in collaboration with Professor Dr. Tobias Bollenbach’s research group. The experiment generated populations of different hybrids that competed for nutrients under different growing conditions. The use of a high-throughput system allowed the observation of hundreds of such populations over 450 bacterial generations. Early results indicated that by using the distribution of fitness effects, predictions can be made about the fitness effects of gene transfer.

“We found that under most growing conditions, some hybrids were better adapted than the parent strain. This result suggests that a shared gene pool might help bacteria adapt to certain environmental conditions. However, there is also conditions in which gene transfer does not confer an advantage,” said Mona Förster, another of the study’s lead authors. In the future, the researchers plan to use the method to predict precisely when gene transfer gene horizontal will accelerate bacterial adaptation.

Strange bedfellows: the origin and evolution of bacterial hybrids

Provided by the University of Cologne