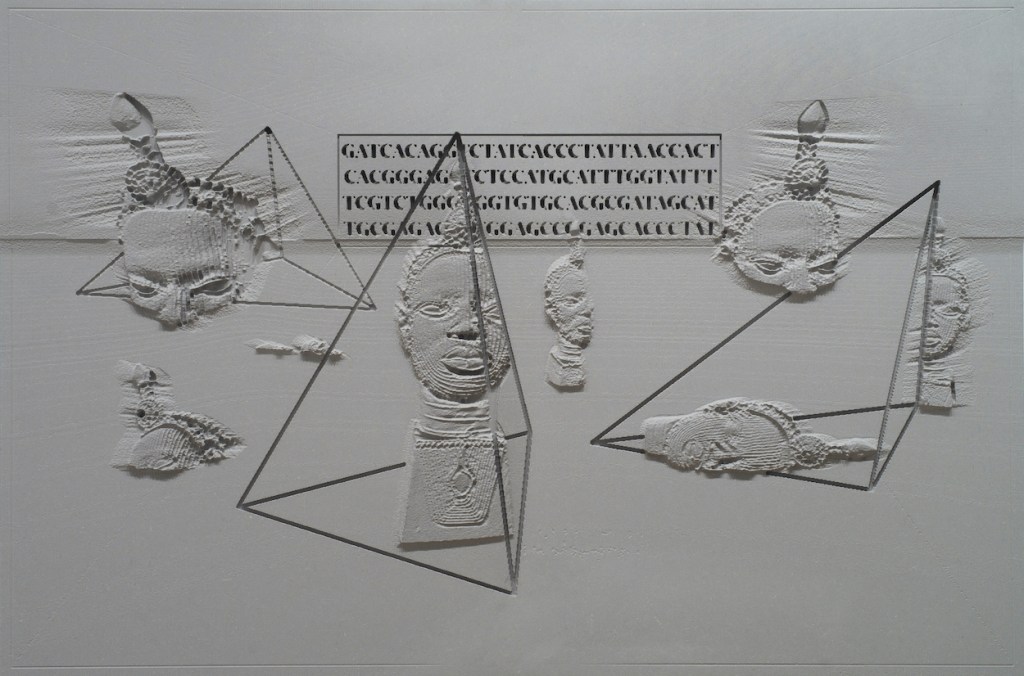 Lately, Coleman Collins has been cutting, tagging and converting his DNA sequence into videos, sculptures and prints. Using iterative processes, he tests the limits of his materials, producing errors, variations and gaps that probe the concept of legacy. These experiments are presented in the new premises of the Brief Histories gallery as part of “Body Errata”, the artist’s first solo exhibition in New York.

In some works, genetics is a starting point for considering what else might be inherited, from family histories to generational trauma. In a series of works made of plywood panels finished to look like stone, Collins used a Computer Numerical Control (CNC) machine to cut out different compositions incorporating the letters A, C, G and T – the nucleotides that make up the DNA. In tetrad (all works 2022), these relatively abstract letters mark different planes of a geometric figure positioned above a more narrative text: 04-010/XMFM WAS BORN A SLAVE IN NORTH CAROLINA. HE NEVER LEARNED TO READ, BUT WAS EXTRAORDINARILY GOOD IN ARITHMETICS AND GEOMETRY. Different types of information meet and change form: if the text is inspired by the traditions of the Collins family, its subject is referenced by a genealogical numbering system. The geometric figure attempts to visually reconcile these two strands of information; however, the actual connections remain elusive. What kinds of information can DNA testing restore? How do they interact with our long-held beliefs and defining personal stories?

In another piece of this series, Sequential shift, the artist juxtaposes a section of his DNA sequence with partial renderings of an Ife head, an icon of West African culture and art. Some of the heads are arranged in tetrahedrons, a shape that Collins calls an ideal shape. Here, the CNC machine has interpreted the artist’s digital files with varying degrees of ease, and the results form a mixed temporal register: while the sharp lines of the tetrahedrons are controlled and exact, repetitive flecks give the heads a pixelated appearance, and clusters of marks around several of them the head fragments give the surface the appearance of having been worn down over time. In this collapsed plane, Collins seems to be part of an artistic lineage.

In a corner of the gallery, an installation entitled Maybe the last time, I don’t know refers to the “grandfather’s axe” paradox. Is a heirloom still “authentic” if all of its parts have been replaced over time? This puzzle is typically used to contemplate the identity of a single entity. However, it can also be used to think about the relationship between a descendant and an ancestor and how much genetic material they actually share. At the gallery, six indistinguishable ax heads are each laser etched with the phrase THIS MAY BE THE LAST TIME, suggesting an uncertain but continuous duration. They are arranged on an MDF panel on the floor; two flat squares of steel in opposite corners slightly elevate two pairs of objects. The work plays with both the physical and philosophical dimensions of the paradox: faced with identical objects, the viewer cannot distinguish an original from its copies. The placement of the axes in an essentially symmetrical and pairwise pattern suggests an effort to assess similarities and differences. Separated from their handles, the ax heads are less functional than symbolic, giving the work a cold, contemplative tone.

In another corner of the gallery, two stacked monitors display alternating video works. In Dispersionthe bottom monitor plays an amateur short film of a boat trip Collins took to Nigeria in 2017: Starting outside the coastal town of Badagry, near the border with Benin, he retraces an ancient slave route that leads to the “gate of no return,” a port where many slaves last set foot in Africa. In the upper monitor, the same video slowly degrades with each repeat, breaking down into pixels and in primary colors, becoming more abstract each time.His disintegration (which Collins achieved by exporting the video again and again) both parallels the deterioration of the artist’s memory of the trip and invokes the erasure violence of black origins through the transatlantic slave trade.Although DNA testing can reveal information about a person’s ancestry, this work, as tetradinsists that a return to basics is always incomplete and alludes to the diffuse effects of generational trauma.

In the center of the gallery, Data Self Portrait 2 connects all of Collins’ iterative processes. Computer motherboard engraved with the artist’s genetic sequence, the work is the most direct instantiation of his DNA (the exact code needed to produce another Coleman Collins), but also the least guided by its interpretation. In its starkness, the work brings an existential dimension to the show: “What does it mean to have a body, and specifically this one? asked the artist speaking of the exhibition. “Body Errata” presents some assumptions, finding new shapes at breaking points in data, narratives and materials.