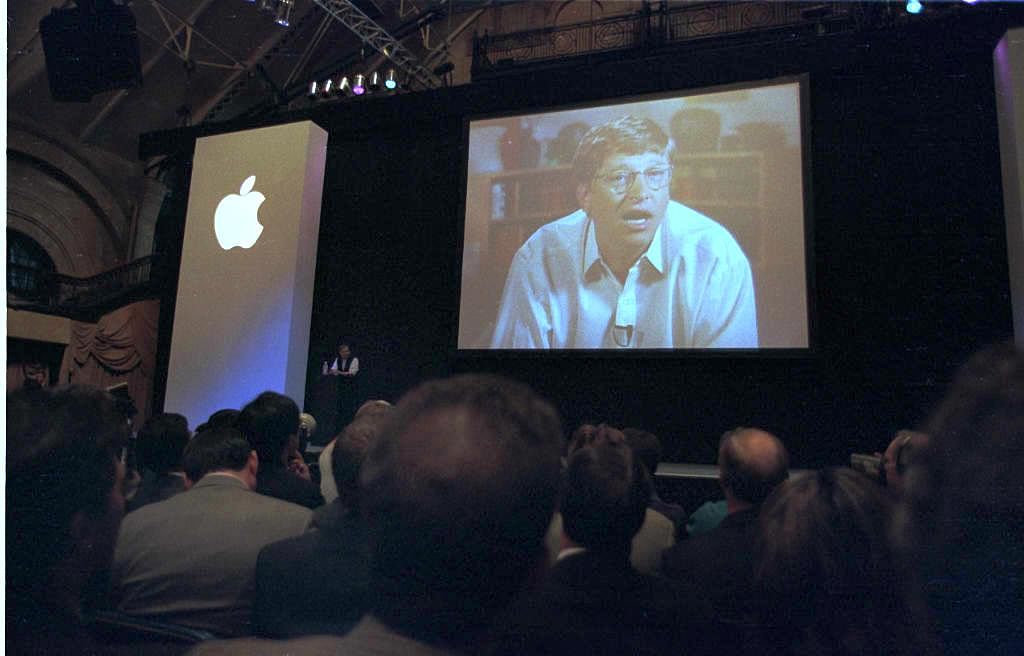 Did you know that Bill Gates and Microsoft saved Apple from bankruptcy?

Microsoft and Apple are often, if not always, seen as each other’s biggest competitor as two of the biggest names in tech. People like to talk about which tech giant has the best products, latest innovations, etc.

But did you know that Microsoft and its founder, Bill Gates, once stepped in to help Apple out of bankruptcy?

This may shock many, especially those who would think Apple, on the verge of bankruptcy, was the perfect opportunity for Microsoft to get rid of its competitors. It really happened. Microsoft saved Apple and we’re about to tell you what happened.

(Photo: JOHN MOTTERN/AFP via Getty Images)
BOSTON, USA: Microsoft Chairman Bill Gates addresses the Macworld Expo in Boston via telephone link after Steve Jobs (small on stage) announced August 06 that he would join the board of directors of ‘Apple. Jobs also announced that Microsoft is investing $150,000,000 to buy non-voting shares of Apple, forging a new alliance between the two rival companies.

Let’s go back in time to August 1997. At that time, Apple was struggling while Microsoft was the bigger and more successful company between the two. Bill Gates, who was the CEO of Microsoft at the time, agreed to invest $150 million to bail Apple out of bankruptcy.

The announcement, which was made by the late Steve Jobs at the Macworld Boston conference that year, shocked and upset many. According to an article by CNBCGates was even booed by the audience when he made an appearance at the conference via satellite.

Needless to say, the actual deal was more complicated than Microsoft was just giving Apple money. An article by WIRED says that although Jobs got the money he needed for his business, Microsoft got non-voting shares in return. Apple also agreed to drop a lawsuit against its competitor alleging “Microsoft copied the look and feel of Mac OS for Windows.”

That’s not all. Apple also agreed to make Internet Explorer the default browser on its computers, although it was also agreed that this would not be the only option users would have. Microsoft, on the other hand, has agreed to support Office for Mac for five years.

The cover of Time magazine

Many, as mentioned earlier, did not believe that Microsoft would help its own competitor stay in the industry. Contributing to the surreal moment is a cover that Time Magazine eventually published that featured the quote “Bill, thank you. The world is a better place.”

Steve Jobs is also seen on the cover using his cell phone. The text on the cover adds that the quote was said by Jobs to Gates while they were talking on the phone.

You can see the cover of the magazine, which was uploaded by The Code Academy Twitter accountbelow:

20 years ago this week, Steve Jobs was on the cover of @WEATHERthanking @BillGates to “save Apple”. pic.twitter.com/AhUnLnOZ8t

What Gates and Jobs had to say about the deal

Ten years after the deal that shocked the tech industry, Bill Gates and Steve Jobs sat down for an interview to talk about it. Specifically, the interview took place during the D5 technical conference.

In the interview, Jobs said what was happening to his company at that time was crazy and that Apple was in really big trouble, according to CNBC. Realizing how badly his business was in trouble, he decided to step away from a competitive mindset and called Gates so they could sort things out.

“What was really clear was that if the game was a zero-sum game where for Apple to win, Microsoft had to lose, then Apple was going to lose,” Jobs said during the interview.

“Apple didn’t have to beat Microsoft. Apple had to remember who Apple was because they forgot who Apple was,” added the late Apple founder.

For his part, Bill Gates said things have been going very well for both tech companies. “In fact, every couple of years or so we’ve been able to do something new on the Mac and it’s been great business for us,” the Microsoft founder explained.

You can watch the interview below: