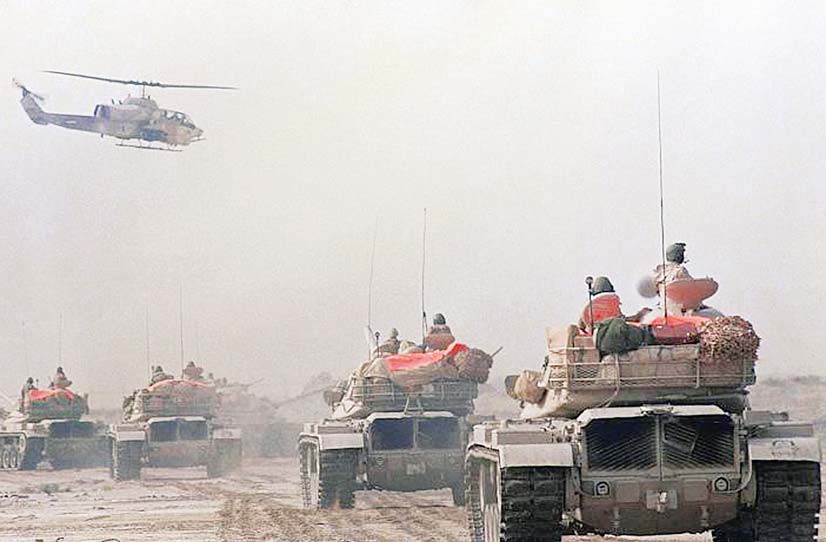 DALLAS, May 19: For three decades, scientists have debated the underlying cause of Gulf War Illness (GWI), a set of unexplained and chronic symptoms affecting veterans of the Arab Gulf War. Now researchers led by Robert Haley, MD, professor of internal medicine and director of the division of epidemiology at the University of Texas Southwestern Medical Center (UT Southwestern), have solved the mystery, showing through a detailed genetic study that the nerve gas sarin was largely responsible for the syndrome.

The findings were published May 11, 2022 in Environmental Health Perspectives, a peer-reviewed journal supported by the National Institute of Environmental Health Sciences, with an accompanying editorial on the article by leading environmental epidemiologists. . Dr. Haley’s research group not only identified that veterans exposed to sarin were more likely to develop GWI, but also discovered that the risk was modulated by a gene that normally allows some people’s bodies to break down sarin better. nerve gas. Gulf War soldiers with a weak variant of the gene who were exposed to sarin were more likely to develop symptoms of GWI than other exposed veterans who had the strong form of the gene. “Quite simply, our findings prove that Gulf War sickness was caused by sarin, which was released when we bombed Iraqi chemical weapons storage and production facilities,” said Dr Haley, a medical epidemiologist who has been investigating GWI for 28 years.

“There are still over 100,000 Gulf War veterans not getting help for this disease and we hope these findings will accelerate the search for better treatment.” In the years immediately following the Gulf War, more than a quarter of American and coalition veterans who served in the war began to report a series of chronic symptoms, including fatigue, fever, night sweats, memory and concentration problems, difficulty finding words, diarrhea. , sexual dysfunction and chronic body pain. Since then, university researchers and those from the Army and Department of Veterans Affairs have studied a list of possible causes of GWI, ranging from stress, vaccinations and oil well burning to exposure to pesticides, nerve gas, anti-nerve gas drugs, and depleted uranium.

Identified
Over the years, these studies have identified statistical associations with several of them, but no cause has been widely accepted. More recently, Dr. Haley and a colleague reported on a large study testing veterans’ urine for depleted uranium that would still be present if it had caused GWI and found none. “As early as 1995, when we first defined Gulf War Illness, the evidence pointed to exposure to nerve agents, but it took many years to build a compelling case,” said Dr. Haley, incumbent. from the U.S. Armed Forces Veterans Distinguished Chair in Medical Research, honoring Robert Haley, MD, and U.S. veterans of the Gulf War. Sarin is a poisonous synthetic nerve agent, first developed as a pesticide, which has been used in chemical warfare; its production was banned in 1997. When people are exposed to the liquid or gaseous form, sarin enters the body through the skin or breath and attacks the nervous system. High-level sarin often results in death, but studies of survivors have found that exposure to lower-level sarin can lead to long-term impairment of brain function.

The US military has confirmed that chemical agents, including sarin, were detected in Iraq during the Gulf War. In particular, satellite imagery documented a large cloud of debris rising from an Iraqi chemical weapons storage site bombed by US and coalition aircraft and transiting over US ground troop positions where it set off thousands of nerve gas alarms and was found to contain sarin. Previous studies have found an association between Gulf War veterans who reported exposure to sarin and symptoms of GWI. However, critics have raised questions of recall bias, including whether veterans with GWI are simply more likely to recall and report exposure due to their assumption that it might be related to their disease. “What makes this new study a game-changer is that it links GWI to a very strong gene-environment interaction that cannot be explained by environmental exposure recall errors or other biases. in the data,” Dr. Haley said.

Deployed
In the new paper, Dr. Haley and colleagues studied 508 deployed veterans with GWI and 508 deployed veterans who developed no symptoms of GWI, all randomly selected from more than 8,000 representative Gulf War veterans who responded to the US military health survey. They not only measured sarin exposure – asking if the veterans had heard any chemical nerve gas alarms sounding while deployed – but also took blood and DNA samples from each veteran. The researchers tested the samples for variants of a gene called PON1. There are two versions of PON1: the Q variant generates a blood enzyme that effectively breaks down sarin while the R variant helps the body break down other chemicals but is not effective at destroying sarin.

Everyone carries two copies of PON1, giving them either a QQ, RR, or QR genotype. For Gulf War veterans with the QQ genotype, hearing nerve agent alarms — an indicator of chemical exposure — increased their odds of developing GWI by 3.75 times. For those with the QR genotype, alarms increased their risk of GWI by 4.43 times. And for those with two copies of the R gene, ineffective at breaking down sarin, the risk of GWI was increased 8.91 times. Soldiers with both the RR genotype and low sarin exposure were more than seven times more likely to develop GWI due to the interaction per se, beyond the increased risk of both risk factors acting alone. For genetic epidemiologists, this number leads to a high degree of confidence that sarin is a causative agent of GWI. “Your risk gradually increases depending on your genotype, because these genes determine how well your body inactivates sarin,” Dr. Haley said. “That doesn’t mean you can’t get Gulf War disease if you have the QQ genotype, because even the highest genetic protection can be overridden by higher intensity exposure.” This kind of strong gene-environment interaction is considered a gold standard for showing that a disease like GWI was caused by a particular environmental toxic exposure, he added. The research does not rule out that other chemical exposures may be responsible for a small number of Gulf War illness cases. However, Dr. Haley and his team performed additional genetic analyzes on the new data, testing for other factors that might be linked, and found no other contributing causes.

“There is no other risk factor that comes close to having this level of causal evidence for Gulf War illness,” Dr. Haley said. The team is continuing to research the impact of GWI on the body, particularly on the immune system, whether any of its effects are reversible, and whether there are biomarkers to detect previous exposure to sarin or GWI. . By UT Southwestern Medical Center

References: “Assessment of a gene-environment interaction of PON1 and low-level nerve agent exposure with Gulf War disease: a prevalence case-control study drawn from the national population sample of the ‘United States Military Health Survey’ by Robert W. Haley, Gerald Kramer, Junhui Xiao, Jill A. Dever, and John F. Teiber, May 11, 2022, Environmental Health Perspectives. “Guest Perspective: Causal Implications of Environmental Genetic Studies Applied to Gulf War Diseases” Marc G. Weisskopf and Kimberly A. Sullivan, May 11, 2022, Environmental Health Perspectives. Other UTSW researchers who contributed to this study include John Teiber, Gerald Kramer and Junhui Xiao. The US military health survey was a collaborative effort of UTSW and a large survey research team from RTI International, including Jill Dever, who also contributed to this article. The study was funded by the US Departments of Defense and Veterans Affairs. The opinions, interpretations, conclusions and recommendations are those of the authors and are not necessarily endorsed by the US Departments of Defense or Veterans Affairs.