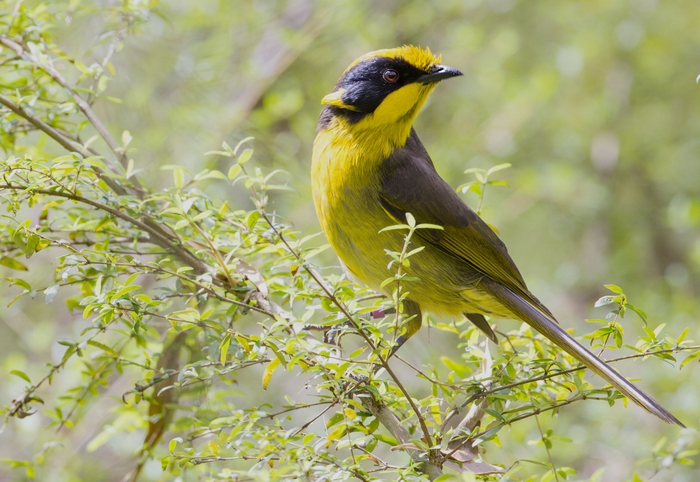 Monash University researchers are on the verge of saving the critically endangered Helmeted Honeyeater, an iconic bird that serves as the emblem of the Australian state of Victoria.

The scientists sequenced the honeyeater’s chromosomes, which is a more detailed approach than just genetic sequencing. A high-density genetic map was created, detailing over 50,000 marker positions.

The results of the genetic analysis will allow researchers to examine the impact of breeding helmeted honeyeaters with another subspecies, and will also help experts monitor their overall health.

Helmeted honeyeaters are beautiful yellow and black birds native to Australia. Unfortunately, honeyeater populations have declined significantly since the arrival of white settlers in Australia.

In the 1980s, about 50 individuals survived the decimation. All birds were found in Yellingbo Nature Conservation Reserve, due to habitat restoration and captive breeding their population has increased to 250 birds.

It’s not all a conservation story for helmeted honeyeaters. Because the bird population has dropped so low, most of the remaining birds are close relatives, and inbreeding and breeding problems are common.

“Because the helmeted honeyeater is the last of its species, the genetic augmentation must come from a different subspecies. However, this type of genetic mixing is not common: conservation managers generally avoid interbreeding subspecies for fear of losing local adaptation and specificity,” explained Dr Alexandra Pavlova.

Now, with the high-quality genetic material available, conservationists can examine the consequences of every captive breeding operation. This information can be used as a guide for conservation efforts and hopefully successfully restore the population.

“The genome sequence and genetic map will be used to strike the right balance between rescuing the helmeted honeyeater from extinction through inbreeding, while retaining the unique characteristics that make it a helmeted honeyeater,” said lead author of the study, Diana Robledo-Ruiz.

The study is published in the journal GigaScience.

Does moderate drinking protect your heart? A genetic study offers a new answer.