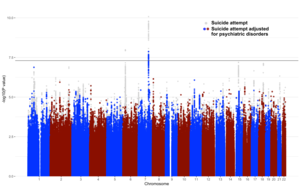 In the largest genetic study of suicide attempts to date, researchers have identified a region of the genome on chromosome 7 containing DNA variations that increase a person’s risk of attempting suicide.

The study also found an overlap in the genetic basis of suicide attempts and that of associated psychiatric disorders, particularly major depression, as well as that of non-psychiatric risk factors such as smoking, risky behaviors, sleep disturbances and general poor health. The results of the study, published on November 30 in Biological psychiatrysuggest that the genetic bases of suicide attempts are partly shared and partly distinct from those of related psychiatric disorders.

Suicide is a global public health problem, responsible for nearly 800,000 deaths per year. Non-fatal suicide attempts are estimated to occur more than 20 times for every suicide death and are a major source of disability, reduced quality of life, and social and economic burden. Suicidal thoughts and behaviors can be reduced with appropriate mental health support and treatment. Therefore, it is essential to better understand the underlying biological pathways involved in suicide attempts or suicidal thoughts, which could provide potential avenues for treatment and prevention strategies.

To help elucidate the underlying biology of suicide attempts, an international consortium of scientists from the International Suicide Genetics Consortium conducted a genome-wide association study. This method involves scanning the DNA of many people, looking for genetic markers that are more common in those who have attempted suicide. The team scanned more than 7.5 million common variations in the DNA sequence of nearly 550,000 people, nearly 30,000 of whom had attempted suicide.

“In addition to identifying the location of suicide attempt risk on chromosome 7, we discovered a strong overlap between the genetic basis of suicide attempt and that of psychiatric disorders, in particular major depression, as well as some overlap with the genetics of smoking, pain, risk-taking, sleep disturbances, and general poor health,” said Niamh Mullins, PhD, assistant professor of psychiatric genomics at the Icahn School of Medicine at Mount Sinai, Co. -founder and co-chair of the consortium, and lead author of the paper.”This genetic overlap with non-psychiatric risk factors remained largely unchanged when adjusting for psychiatric disorders, suggesting that a substantial component of the basis biologic of attempted suicide is not simply a by-product of a comorbid psychiatric illness, but rather may be the result of a shared illness. biology with non-psychiatric risk factors.

The association between genetic variations on chromosome 7 and risk of suicide attempt was also not mediated by comorbid psychiatric disorders and was replicated through independent analysis of more than 14,000 veterans who had undergone attempted suicide as part of the Million Veterans Program, a national research program. to learn how genes, lifestyle, and military exposures affect health and disease.

“This study is an exciting advance in our understanding of the relationship between the genetics of suicide attempt and that of psychiatric and non-psychiatric risk factors,” said JooEun Kang, PhD student at Vanderbilt University Medical Center and co-author. main of this paper.

DNA variations in this region have previously been linked to insomnia, smoking, and risky behaviors, and while future work is needed to uncover the underlying biological mechanism, findings like these bring the researchers in understanding the neurobiology of suicidality.

“The study results also underscore the importance of investigating potential direct causal pathways between these risk factors and suicide attempts in patients with and without psychiatric illness,” added Douglas Ruderfer, PhD, Associate Professor of genetic medicine, psychiatry and biomedical informatics at Vanderbilt. University Medical Center, co-founder and co-chair of the consortium, and lead author of the article.

The International Suicide Genetics Consortium includes more than 260 scientists in more than 20 countries dedicated to studying the genetic bases of suicidality. Their work lays the groundwork for future, larger studies aimed at identifying genetic risk factors for suicide attempts in other regions of the genome, as well as other studies focused on suicidal thoughts. The ultimate goal of this research is to better understand the underlying biological pathways involved in suicidality, providing potential avenues for treatment and prevention strategies.

If you are in crisis, please call the National 24-Hour Suicide Prevention Lifeline at 1-800-273-TALK (8255), or contact the Crisis Text Line by texting TALK to 741741, or visit their website at: http://suicidepreventionlifeline.org.

About Mount Sinai Health System
Mount Sinai Health System is the largest academic medical system in New York City, encompassing eight hospitals, a leading medical school, and an extensive network of outpatient practices throughout the greater New York area. We advance medicine and health through education and unparalleled translational research and discovery to provide the safest, highest quality, most accessible and equitable care, and the best value of any healthcare system. health in the country. The health system includes approximately 7,300 primary and specialty care physicians; 13 autonomous joint venture centers; more than 410 outpatient practices in the five boroughs of New York, Westchester and Long Island; and over 30 affiliated community health centers. Mount Sinai Hospital is listed in US News and World Reports “Honor Roll” of the top 20 hospitals in the United States and among the best in the country by specialty: #1 in geriatrics and top 20 in cardiology/cardiac surgery, diabetes/endocrinology, gastroenterology/gastrointestinal surgery, neurology/neurosurgery, orthopedics , pulmonology / Pulmonary surgery, urology and rehabilitation. Mount Sinai Kravis Children’s Hospital is listed in US News and World Reports “Best Children’s Hospitals” among the best in the nation in four out of 10 pediatric specialties. New York Eye and Ear Infirmary of Mount Sinai is ranked in the top 20 nationally for ophthalmology. The Icahn School of Medicine at Mount Sinai is one of three medical schools that has distinguished itself by several indicators: ranked in the top 20 by US News and World Reports “Best Medical Schools”, aligned with a US News and World Report “Honor Roll” hospital and #14 in the nation for National Institutes of Health funding. NewsweekThe company’s “World’s Best Smart Hospitals” ranks Mount Sinai Hospital #1 in New York and among the top five in the world, and Mount Sinai Morningside in the global top 20, and “World’s Best Specialty Hospitals” rank Mount Sinai Heart #1. 1 in New York and No. 4 worldwide and the division of gastroenterology as No. 3 worldwide. For more information, visit https://www.mountsinai.org or find Mount Sinai on Facebook, Twitter and YouTube.

Warning: AAAS and EurekAlert! are not responsible for the accuracy of press releases posted on EurekAlert! by contributing institutions or for the use of any information through the EurekAlert system.