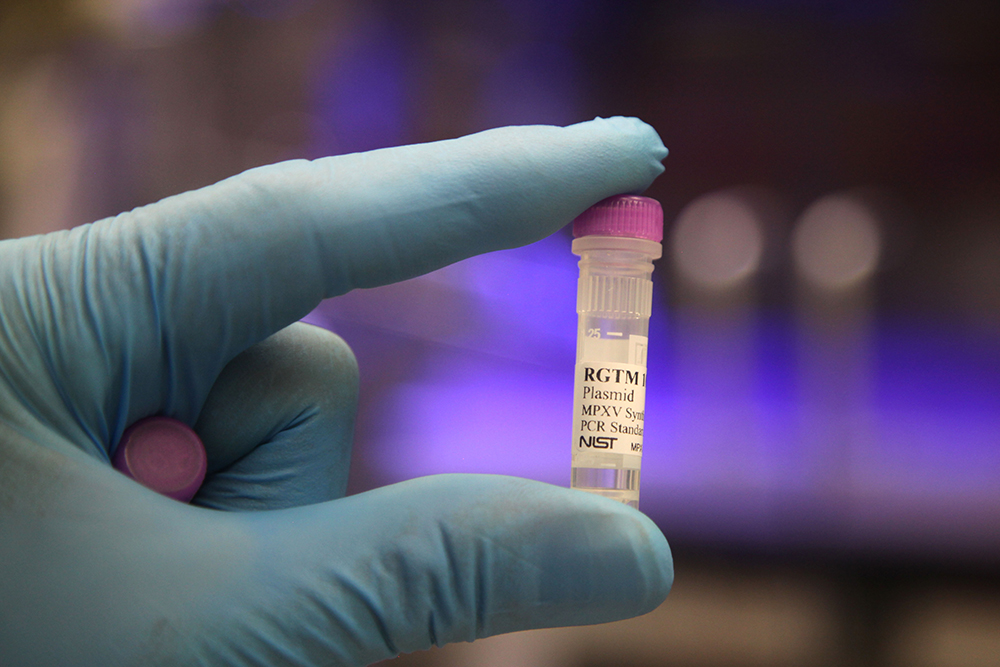 In an effort to help accelerate the expansion of testing for monkeypox in the United States, the National Institute of Standards and Technology (NIST) has produced materials that can help ensure accurate testing for the disease . NIST is making the material, which contains gene fragments from the virus that causes the disease but is non-infectious and safe to handle, freely available for use by test manufacturers and test labs.

Monkeypox is spread by close contact and can cause fever, flu-like symptoms and skin lesions. More than 3,500 cases of monkeypox have been confirmed in the United States since the outbreak began in late May, and the World Health Organization has declared monkeypox a global health emergency.

Testing is needed to identify the extent of an outbreak and contain it, and to properly care for people who have contracted the disease and those who may have been exposed to it. The monkeypox test, as the most sensitive test for COVID-19, uses a technique called the polymerase chain reaction, or PCR, to detect the genetic sequences of the virus that causes the disease.

Because the NIST material contains these genetic sequences, labs can use it as a positive control, that is, a sample that should give a positive result if their test works correctly. As the U.S. Centers for Disease Control and Prevention (CDC) works to expand the country’s testing capacity, NIST’s materials will meet a growing need.

“Given the urgent public health need, we are releasing it as quickly as possible without compromising quality.” —Scott Jackson, microbial geneticist at NIST

“Positive control materials are critical to ensuring the reliability of diagnostic tests,” said Victoria Olson, deputy director of laboratory science and safety at the CDC. “Having a reliable supply of high-quality control material from a trusted source like NIST will help us mount an effective testing program faster.”

The NIST control material is a liquid solution containing partial sequences of nine monkeypox genes bound together into DNA molecules approximately 3,400 base pairs, or letter pairs, in length.

The value of NIST control material is not in the DNA itself, which is relatively easy to synthesize. Rather, it is NIST’s assurance that each vial of the material contains the same, very precisely measured amount of DNA, to a known degree of certainty. Namely: each microliter contains 110,000 copies of the DNA strand, plus or minus 10%.

NIST scientists analyzed the DNA to make sure there were no errors in the genetic sequences. They measured the DNA concentration in the material using a high-precision technique called digital PCR. And they worked with statisticians at NIST to ensure that each microliter of the material contains the same amount of DNA, within stated uncertainty limits.

“We’re doing a lot of work to make sure we’re getting these numbers right,” said Scott Jackson, the NIST microbial geneticist who led the effort.

On June 22, the US Department of Health and Human Services announced that it would allow commercial labs to perform monkeypox testing, which had previously only been done by a limited number of public labs. Commercial labs can use NIST material to validate their tests and determine test sensitivity, which is the lowest amount of genetic material their tests can detect.

NIST material can also be used when monitoring wastewater for the virus, which can indicate whether a virus is present in a community and its prevalence. This type of monitoring can be complicated by the fact that the virus becomes very dilute in the wastewater, and researchers can use monitoring to make sure their tests are working properly.

In 2020, NIST released similar positive control material for SARS-CoV-2, the virus that causes COVID-19. This material was used to help standardize disease testing.

NIST produces thousands of Standard Reference Materials, or SRMs, which are used to ensure accurate measurements in many industries. The agency is releasing this positive control as “research-grade test material” because it has not yet gone through the full battery of tests to be considered a NIST SRM. For example, researchers are still studying how the measured characteristics of the material change over time.

“But given the urgent public health need,” Jackson said, “we’re releasing this as quickly as possible without compromising quality.”

NIST makes this material available free of charge to any test manufacturer or test lab worldwide. Technical information and instructions for requesting the material are available on the NIST website.