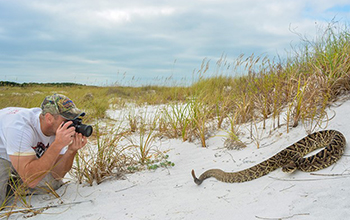 The tiger rattlesnake has the simplest, yet most poisonous, venom of all rattlesnake species. Now, new research led by a biologist at the University of South Florida explains the genetics behind the dreaded predator bite.

The research is published in the journal Proceedings of the National Academy of Sciences. USF biologist Mark Margres and his colleagues sequenced the tiger rattlesnake genome to understand the genotype of the venom trait. Despite the simplicity of rattlesnake venom, Margres says it’s about 40 times more toxic than eastern Florida diamond rattlesnake venom.

The work funded by the U.S. National Science Foundation is the most comprehensive characterization of the venom gene regulatory network to date, according to the researchers. Identifying the key mechanisms in the production of the particularly toxic venom will help scientists explain a wide range of genetic questions.

â€œSimple genotypes can produce complex traits,â€ said Margres. “Here we have shown that the opposite is also true – a complex genotype can produce simple traits.”

The genotype of an organism is the set of genes it carries; its phenotype is the set of its observable characteristics, which can be influenced by its genes, the environment in which it lives and other factors. Evolutionary biologists strive to understand how genes influence variations in phenotype among otherwise similar organisms. In this case, they examined why different species of rattlesnakes differ in venom composition and toxicity.

“Advances in gene sequencing methods allow scientists to answer questions first asked by Darwin over 150 years ago,” says Sam Scheiner, program director in the environmental biology division at NSF. “This study is an important step forward in answering the question of where traits come from.”