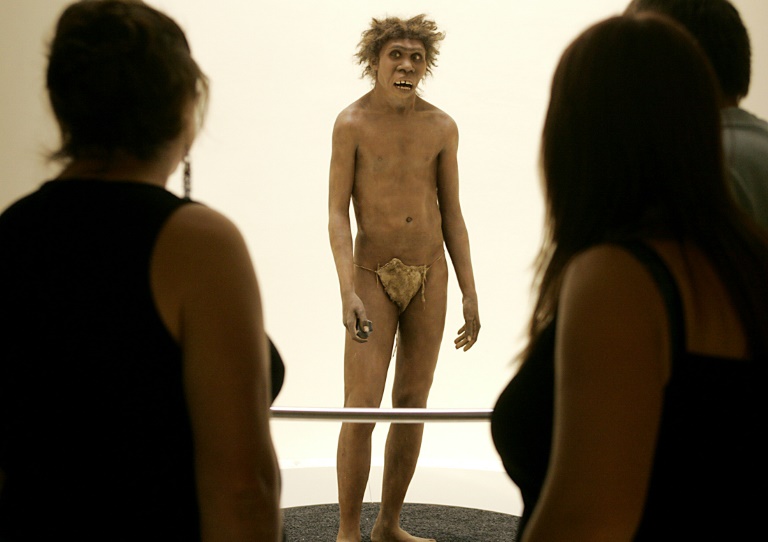 The original Flintstones? The largest ever genetic study of Neanderthals has offered an unprecedented snapshot of a family, including a father and his teenage daughter, who lived in a Siberian cave around 54,000 years ago.

The new research, published Wednesday in the journal Nature, used DNA sequencing to examine the social life of a Neanderthal community, finding that women were more likely to stray from the cave than men.

Earlier archaeological digs have shown that Neanderthals were more sophisticated than previously thought, burying their dead and making elaborate tools and ornaments.

However, little is known about their family structure or the organization of their society.

The sequencing of the first Neanderthal genome in 2010, which won Swedish paleogeneticist Svante Paabo the Nobel Prize for Medicine earlier this month, has offered a new way to learn more about our long-lost precursors.

An international team of researchers has focused on several Neanderthal remains found in the Chagyrskaya and Okladnikov caves in southern Siberia.

The scattered bone fragments were mostly in a single layer in the earth, suggesting Neanderthals lived around the same time.

“We first had to identify how many individuals we had,” Stéphane Peyregne, an evolutionary geneticist at the Max Planck Institute in Germany and one of the co-authors of the study, told AFP.

The team used new techniques to extract and isolate ancient DNA from the remains.

By sequencing the DNA, they established that there were 13 Neanderthals, seven males and six females. Five of the band members were children or young teenagers.

Eleven were from Chagyrskaya Cave, many of them from the same family, including the father and his teenage daughter, as well as a young boy and a woman who were second-degree relatives, such as a cousin, aunt or granddaughter. -mother.

The researchers also found that a male was a maternal relative of the father because he had a genetic phenomenon called heteroplasmy, which is only passed down through a few generations.

“Our study provides a concrete picture of what a Neanderthal community might have looked like,” Max Planck’s Benjamin Peter, who oversaw the research with Paabo, said in a statement.

“It makes Neanderthals a lot more human to me,” he added.

Genetic analysis showed that the group had not interbred with its close relatives such as humans and Denisovans, hominins discovered by Paabo in caves a few hundred miles away.

However, we do know that Neanderthals interbred with Homo sapiens at some point – Paabo’s research also revealed that almost all modern humans have some Neanderthal DNA.

Instead, the community of around 10 to 20 Neanderthals appears to have interbred largely among themselves, displaying very little genetic diversity, according to the study.

Neanderthals existed between 430,000 and 40,000 years ago, so this group lived in the twilight of their species.

The study compared the community’s level of inbreeding to endangered mountain gorillas. Another explanation for inbreeding could be that Neanderthals lived in an isolated region.

The researchers found that the group’s Y chromosomes, which are inherited from father to son, were much less diverse than its mitochondrial DNA, which is inherited from mothers.

This suggests that women traveled more frequently to interact and reproduce with different groups of Neanderthals, while men largely stayed at home.

Balzeau, who was not involved in the latest study, said it was “a very interesting technical feat.”

But “it will have to be compared to other groups” of Neanderthals, he added.