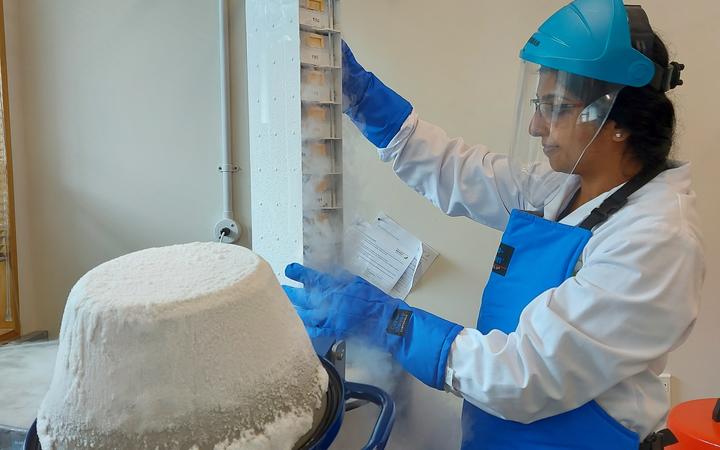 Some of New Zealand’s native plants are undergoing cryopreservation as scientists explore conservation techniques that could protect species at risk for future generations.

Liya Mathew of Plant and Food Research is working on a cryopreservation project.
Photo: Provided

The work was sparked by myrtle rust, a plant disease, which has spread rapidly across the country since it was first identified in 2017.

The fungal disease attacks plants of the myrtaceae or myrtle family, including pÅhutukawa, rÄtÄ, mÄnuka and swamp maire.

Scientists at Plant and Food Research fear this could lead to the extinction of important plant genetic resources and to counter this threat they are studying the effectiveness of seed banks, tissue cultures, plant cuttings and cryopreservation pollen and embryos.

The leader of the science team for the conservation of germplasm, Dr Jayanthi Nadarajan, said that so far there had been little research on the long-term conservation of myrtle species in Aotearoa outside of their natural environment.

Nadarajan said the advantage of cryopreservation is that plant material can be stored for decades, if not centuries, without its genetic components being altered.

She said that in many international seed banks the standard storage temperature was -20 degrees Celsius, but recently it was discovered that not all seeds could be stored at this temperature because some lost their viability very quickly.

â€œSo we found that lowering the temperature further to -196 Â° C, or the cryopreservation temperature, will extend the shelf life of this seed. This is especially critical for wild species, which are quite rare, [and] threatened in nature. So we need to have the long term preservation technique in place. “

She said that to understand the importance of this work, it was enough to look to Australia, where myrtle rust had caused the extinction of some localized species.

In New Zealand, scientists had already seen the harmful effects of this disease on ramarama, where the species was already disappearing from natural populations. They had also recently noticed myrtle rust on the Swamp Mayor’s seeds, which meant these plants would not be able to produce seedlings, Dr Nadarajan said.

â€œIf this scenario continues, it will lead to species extinction. Despite the high risk of extinction of New Zealand Myrtaceae species, limited information is available on seed biology, ecology, [and] population of most species, which is hampering conservation efforts, â€she said.