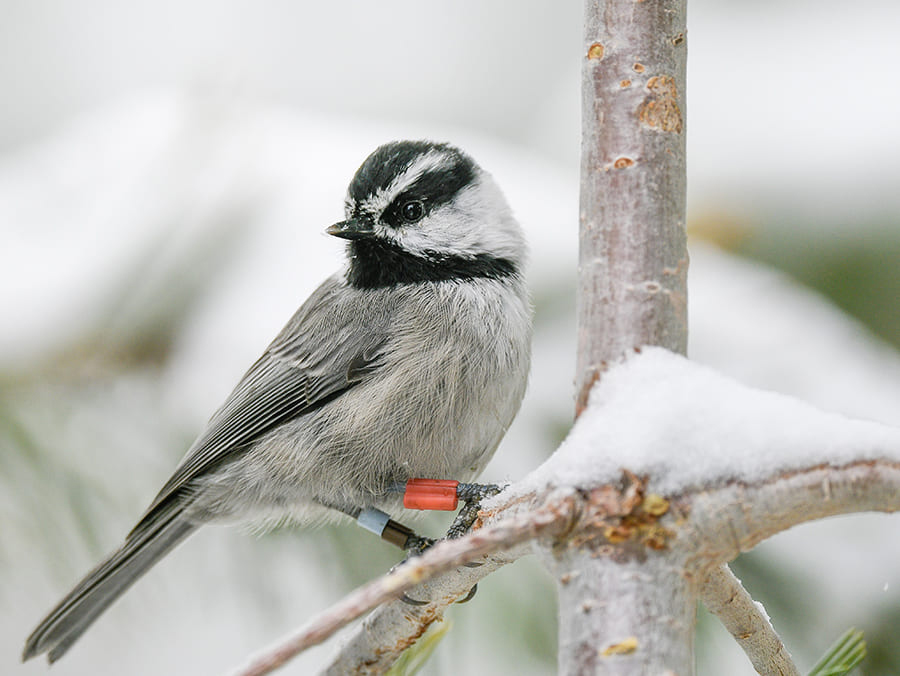 In a long-term study of mountain chickadees, researchers showed for the first time that there is a genetic component linked to the highly specialized spatial memory of small birds and that differences in memory abilities between birds are associated to genetic differences.

“Our recent research on wild mountain chickadees living free in the northern Sierra Nevada mountains provides the first direct evidence for natural selection via differential survival based on spatial learning and memory skills”, Vladimir Pravosudov , lead author of the study and professor in the Department of Biology at the University of Nevada, Reno, said. â€œComparison of the genomes of these birds – ranging from best to worst in their performance on a spatial cognitive task – revealed significant associations with genes involved in neuronal growth and development and hippocampal function.

Mountain Chickadees are non-migratory food-hiding birds that rely on specialized spatial memory to retrieve tens of thousands of stored foods scattered across their range during the Sierra’s harsh winters. Individuals with better spatial learning and memory abilities are more likely to survive their first winter than those with poorer spatial cognition.

To test spatial memory, Pravosudov and his team built sophisticated feeders equipped with radio frequency identification where mountain tits banded with unique passive integrated transponder (PIT) beacons had to find the only feeder on a board of eight that would give them a seed.

The feeder sensor reads the bird’s identification tag and if it is the corresponding feeder for that individual, a mechanism opens the door and the bird obtains a seed. Co-author Eli Bridge of the Ecology and Evolutionary Biology program at the University of Oklahoma led the design and construction of the RFID system.

Scientists then tracked how well the birds learned and remembered their assigned feeder by measuring “errors” or the number of ungrateful feeders each bird visited before visiting the correct feeder in multiple trials.

â€œThis is an effective system for testing spatial learning and memory in hundreds of wild tits in their natural environment,â€ Pravosudov said. “We have already shown that even very small variations in performance are associated with differences in survival.”

In other words, the genes of an individual bird appear to lay the cognitive foundation upon which that individual can then build through learning and experience. This suggests that the tit spatial cognition can be determined, at least in part, early in development, and that it is not just a learned behavior.

â€œThe environment is still very important in terms of shaping behavior, but our work here suggests that genes can create brain structures, and then experience and learning can add to that,â€ Carrie Branch , senior author and postdoctoral researcher at the Cornell Lab of Ornithology, said.

Pravosudov is currently the only laboratory in the world that performs a systematic study of spatial learning and memory in foraging wild birds under extreme environmental conditions.

“This article arose out of Professor Pravosudov’s development of the study system for mountain chickadees – one of the most important, perhaps the most important systems in the world for studying animal cognition in nature,” he said. said Jack Hayes, director of the biology department. . “The article makes an exciting connection between phenotypic and genomic variations in nature.”

The team sampled 42 Mountain Chickadees over three years of best-to-worst testing in their performance on a spatial learning and memory task. The group with better spatial cognition was associated with a significant survival advantage. Birds from both high and low altitudes were selected for each performance group to ensure that the strongest signal between groups was a variation in cognition and not an altitude correlation.

To understand the link between spatial memory and genetic architecture, Georgy Semenov and Scott Taylor (also lead author of the paper) from the University of Colorado-Boulder sequenced and analyzed the genomes of mountain titmouses whose cognitive performance varied.

â€œWe used two methods to link genetic variation to spatial memory in chickadees,â€ Semenov said. â€œIn the traditional genome-wide approach, we compared genetic data between individuals, from those that performed well on the spatial learning and memory task to those that performed poorly. same comparison with a new machine learning algorithm.

“Both methods showed hundreds of differences associated with spatial memory. Numerous variations in genomes were revealed in areas known to be associated with learning, memory, and neural development in the brain.”

Besides Carrie Branch, Vladimir Pravosudov, Scott Taylor, Georgy Semenov and Eli Bridge, other co-authors of the article included Dominique Wagner of the University of Colorado at Boulder as well as Benjamin Sonnenberg and Angela Pitera who are doctoral students at Pravosudov’s laboratory. in the graduate program in Ecology, Evolution and Conservation Biology at the University of Nevada at Reno.

This research was supported by the National Science Foundation with two grants to the University of Nevada, Reno (Vladimir Pravosudov) and the University of Colorado Boulder (Scott Taylor); and a Rose Postdoctoral Fellowship from the Cornell Lab of Ornithology (Carrie Branch).

All photographs accompanying this article were taken by Vladimir Pravosudov.