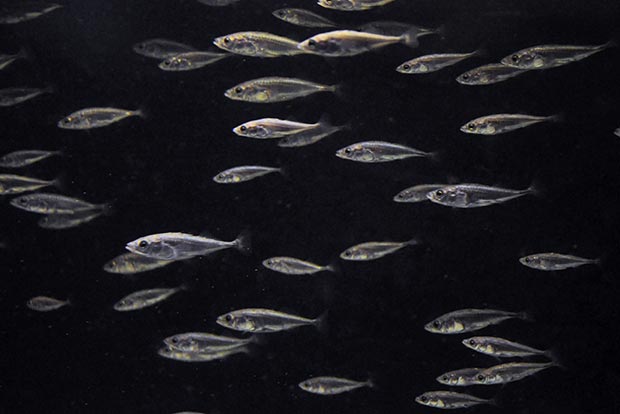 At the culmination of a seven-year project, Peichel and his team have now identified the gene responsible for these behavioral differences – schooling or unschooling – between marine and freshwater sticklebacks. The research team describes their findings in a study published earlier this month in the journal Genetics. It’s one of the first times scientists have found the gene that underlies behavioral change in natural populations of vertebrate animals, Peichel said.

Drawing this explicit line between gene and behavior helps researchers understand the true nature of evolution – changes in behavior among groups of animals can eventually lead to the evolution of new species.

“Understanding which genes are evolutionarily important tells us something about how evolution happens,” she said. “We know that evolution is a change in [genes] over time…I think it’s intrinsically interesting to know, are there particular types of genes that are used more in evolution?

The particular gene they found could also explain why sticklebacks are so adaptable to new environments, Peichel said.

“A rare moment you get in science”

Peichel’s research team had a daunting task ahead of them. Studying “natural” animals in the lab is difficult in every way – lab animals are usually chosen and bred for their relative ease of working in an artificial setting – but the school of fish added an extra layer of difficulty.

To understand the genetics at play, the research team had to study each fish in isolation. But school is a group activity. Dr. Anna Greenwood, a former Fred Hutch behavioral biologist working in Peichel’s lab, and Dr. Abigail Wark, who was pursuing her PhD in the lab, set out to solve this problem – starting in 2009 – by fooling the fish. They thought that if they could get the stickleback to “school” with a set of fake fish, they could study this social behavior in individual animals.

But they weren’t sure the fish would be fooled. To see if their idea had legs, Wark fashioned several gray plastic fish models from casts of real sticklebacks and tied them to a string. Then she dragged the string through an aquarium containing a single stickleback fish.

“We were amazed when this little fish, a live stickleback, really started to approach and follow the school. We could tell even then — when he was clearly spooked by Abby’s hand and in that bright light — it was probably going to work,” said Greenwood, who is now a program manager at Amazon. “It was a really exciting moment, one of those rare moments you have in science. It’s just a feeling of pure excitement and fascination.

The researchers set to work to make their system more rigorous and reproducible. They wanted to build something that wouldn’t look like a predator to the fish (like Wark’s hand did) and that would make the plastic fish always “rise” the same way. This engineering task itself was a challenge, previously described in the story “MacGyvering Lab Equipment”, but in the end Greenwood, Wark and their colleagues ended up with a school of fish mechanical robot that made rotate eight of the fake fish models in a circle through a round aquarium.

They then looked at the sticklebacks’ tendencies to join the fake group of fish and their ability to train proficiently once they joined – whether they were able to keep their bodies parallel to that of the models.

The robot allowed researchers to determine that stickleback schooling has a genetic basis and is not a learned behavior. In a previous study, published in 2013, they showed that two components of schooling – how well the school of fish with patterns and whether sticklebacks are motivated to go to school in the first place – are related to two regions distinct from the genome.

In the current study, Peichel, Greenwood and their colleagues discovered the specific gene responsible for sticklebacks’ schooling abilities. It’s called ectodysplasin, or Eda for short. It is also involved in the bony plates of sticklebacks (marine sticklebacks are heavily armored, their freshwater cousins ​​less) and in the formation of “lateral lines” – lines of sensory hairs, similar to the hairs in our ears, which run down either side of the fish’s body and help them orient themselves by touch, much like a cat’s whiskers. Sticklebacks have a pair of these sensory hairs on each bone plate. Freshwater sticklebacks have only one line of hairs.

Freshwater sticklebacks – fish with fewer bony plates, fewer sensory hairs, and which cannot go to school – have much lower amounts of Eda protein in their bodies. So the researchers decided to see what happened when they increased the gain on the Eda gene. When they genetically manipulated the freshwater fish with high levels of Eda, the fish were suddenly able to go to school – like their marine counterparts, but not as well.

“They are not totally marine. It’s not a single gene that controls behavior,” Peichel said.

The history of biological research is replete with studies of genetic changes, or mutations, and their effects on certain physical traits – although the list of behavior-related genetic changes is much shorter. What sets their study apart, Greenwood said, is that they found a genetic change that affects natural behavior in wild, non-lab-bred creatures.

“You can’t create a huge mutation that ruins an entire organism. It is a small change that occurs during the natural evolution of a species that must continue to live while that change occurs,” Greenwood said. “We just don’t have as many examples of the kinds of genes that act during evolution.”

Peichel thinks freshwater sticklebacks may have evolved to suppress the Eda protein because freshwater contains very low levels of minerals needed for bone formation, making it difficult for fish to build plates. when they can find other ways to protect themselves. Researchers still don’t know how patches or sensory hairs might affect schooling – there was a weak correlation between increased sensory cells and better schooling in genetically manipulated fish, but they need more evidence to say. be convinced that these cells are involved in social behavior, said Peichel.

They know that the freshwater version of the Eda gene “hides” in marine populations, which could explain why these fish can adapt so quickly to new environments, Peichel said. If marine sticklebacks suddenly find themselves stranded in fresh water, this hidden gene may allow some members of the group to survive.

“They have the raw genetic variation they need to adapt,” she said. “We learn lessons about how evolution can happen by asking questions about the genes involved.”